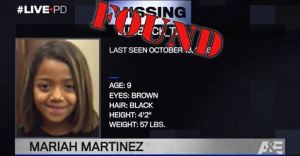 The National Center for Missing and Exploited Children and the Lubbock Police Department has announced that Mariah Martinez, 9 of Lubbock has been found safely.  Martinez was reported missing October 21st, 2016.

The Lubbock Police Department Family Crimes Unit Detectives worked the case from the beginning and followed leads across state lines.  Due to jurisdictional restrictions, they were unable to take custody of Mariah.

The Lubbock Police Department issued a statement Tuesday thanking the National Center for Missing and Exploited Children continuing to place the case at the top of their priority list, ensuring that Mariah return home safely.

This case was featured on Live PD on A&E on March 23rd, 2018.  On March 24th, a Live PD viewer called the tip line for the National Center for Missing and Exploited Children with possible information about the child’s current location.  The information was passed on to the Lubbock Police Department and the New Mexico State Police for follow up.  On Monday, March 26th, Mariah was found safely at a home in Abuquerque, NM.

News Director for KLVT AM 1230 in Levelland. We provide local and regional news updates 5 times a day on KLVT AM 1230 and online at www.klvtradio.com
View all posts by KLVT News →
This entry was posted in Uncategorized. Bookmark the permalink.