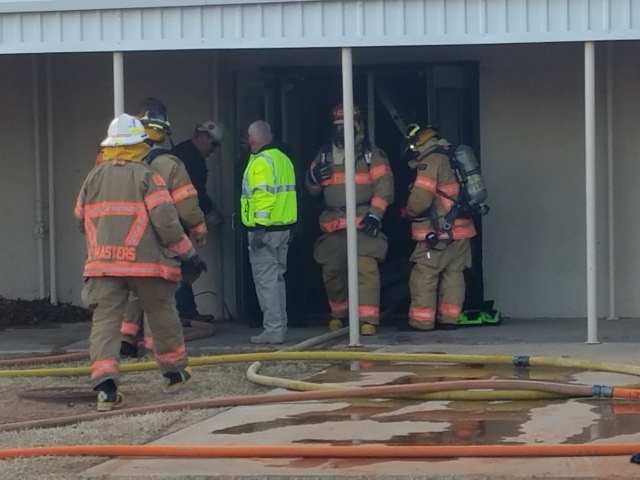 UPDATE:  KLVT News spoke with Fire Chief Bill Durham Tuesday morning.  Firefighters were on the scene for over 3 hours.  He said as of Tuesday the cause of the fire and origin of the fire has not been determined.  He said the fire is currently being investigated by the local fire marshall and could possibly include assistance from the state Fire Marshall’s office if necessary.  A full investigation will be done.  He said the entire building sustained major smoke damage and the fellowship hall had extensive damage.

The Levelland Fire Department responded to a call of a structure fire at the First United Methodist Church in Levelland on Monday around 4pm.  KLVT News was first on the scene and spoke with the Church Secretary, Cindy Terzenbach who was in the building and smelled electrical burning.  She went up stairs in the church and noticed through a window that smoke was coming from an HVAC unit on the roof.  She then went down stairs and shut electric breakers off and called 911.  She said the fire traveled fast and the fellowship hall area filled with smoke very quickly.

The fire department was on the scene along with the Levelland PD, Levelland EMS and the Levelland Emergency Management Coordinator for several hours.  An official cause of the fire has not been determined.  The Levelland Fire Marshall will investigate the fire.  It did appear to be an electrical fire in the attic.

The fellowship hall area sustained major damage.  It is unknown if any other portion of the church was affected.  Fire crews tried to keep smoke confined to the fellowship hall venting it outside as much as possible.